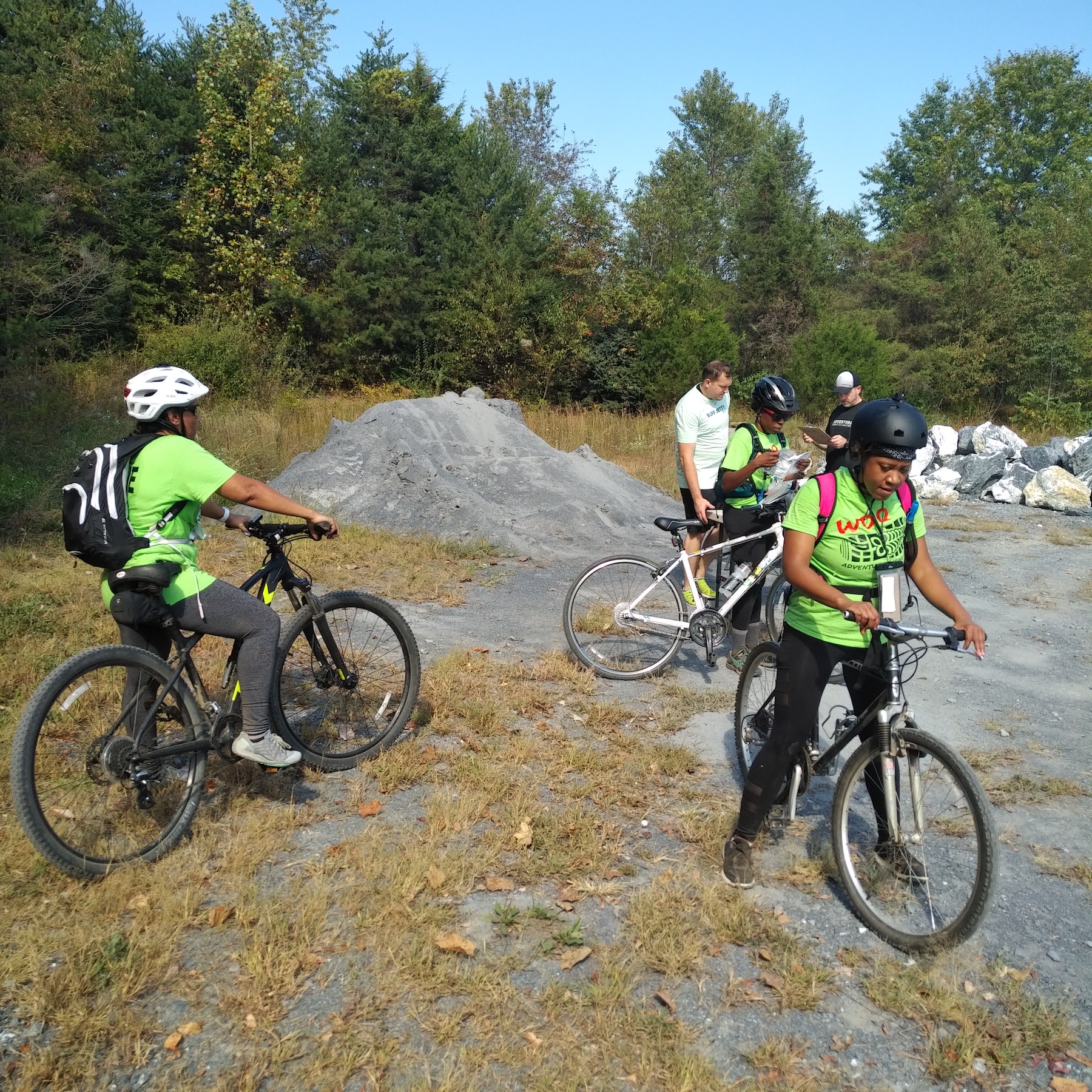 Three club members participated in the Buff Betty Women’s Adventure Race hosted by Adventure Addicts Racing in Boyds, Maryland, racing as WDQ Triple 7s. The night before the race, teammates Dana, Shanay, and Safiya met for the first time. That’s right, they were about to embark on a 6-hour adventure race and they had never all been in the same room before. Shanay and Safiya, lived in the DMV area, but Dana lived in San Diego and could only participate in club activities over the phone or online.

They met, carb-loaded, and strategized. Dana, the team mechanic, had taken an “REI Trailside Bike Repair Workshop” a month before, so she also used this time to practice the skills she had learned. She and Kofi, the head of the WDQ Adventure Racing club, practiced the basics of bike repair, including how to disconnect a bike chain, even though they acknowledged that the skill would probably not be needed. Little did they know that breaking and reconnecting a chain would save the team on the Buff Betty course.

The Morning of the Race

At 5 a.m., the team headed to Black Hills Regional Park and was the first to arrive. They checked in and collected their map, rules of travel, and passport. Dana and Shanay read the rules while Safiya mapped out their course for the four legs of the race: biking, canoeing, trekking, and biking. They had 31 checkpoints to clear located across the park.

After an hour of planning, the 30-minute race brief with the organizers began. There were teams, like them, who had never done an adventure race, and there were veteran teams with over 20 races under their belts. Regardless of the experience level of the more than 30 teams, the excitement in the air was almost electric.

All of the racers gathered at the starting point to complete the race prologue: a foot race to two locations where teams would collect candy, bring it back to race start, and officially begin the Buff Betty Race. As the clock struck 9, Dana, Safiya, and Shanay took off in search of candy.

After finding the candy locations and running back to the start point, they hopped on their bikes to begin the mapped-out course. After only pedaling 100 feet, however, Safiya experienced a catastrophic setback. The derailleur on her bike broke off and she could no longer pedal. They tried to assess the damage and Shanay ran back to the start to alert the organizers of the incident. She returned with one of the volunteers. They watched as team after team passed them. Some stopped to ask if they could help, but there was nothing that anyone could do. They brainstormed options with the race volunteer; Safiya could simply walk her bike the entire way or be towed by teammates. Neither seemed like adequate options. Safiya, not wanting to be the cause of the team’s derailment (pun intended), was hit with a wave of emotion and started to lose hope. Shanay sensed this and gave her a reassuring smile and they continued to brainstorm. Then Dana came up with a genius idea: break the chain and convert the bike to a single speed. This was the skill she had just practiced the night before. The volunteer’s eyes widened in amazement, “Are you able to do that?” Dana confidently answered, “Yes.” The volunteer chuckled and headed back to the race start, stating that they didn’t need his help after all because they had it all under control.

Dana proceeded to work a miracle by breaking the chain and removing the derailleur on Safiya’s bike. First, she had to push the pin out of the chain link, then slide the derailleur off. Next, she pushed a pin out of another link to shorten the chain and finally linked the chain back together. The overall process was difficult, as the tool did not have a lot of leverage and cut into the team members’ hands as they took turns. Fortunately, Kofi, who was watching intently from his car parked on the side of the road, called out a great question, “Don’t you have a Leatherman?!” Dana grabbed the multi-tool to go-go gadget it into a pair of pliers, which she then used to remove the pin with ease. After working on the bike for almost an hour, it was finally ready. Safiya would have to ride her bike on speed 4 for the entire race, but the team was still in the game. Shanay and Safiya began calling Dana the “Breaker of Chains,” borrowing the title from a “Game of Thrones” character.

At about 10:15 a.m., Safiya, Shanay, and The Breaker of Chains once again hopped on their bikes. They found the first few checkpoints and ran into a few teams, which gave them hope that they weren’t too far behind. Teams had the option of collecting three extra checkpoints during the first bike leg, during the paddle leg, or during the second bike leg. Team WDQ Triple 7s chose to get it out of the way first. On the way back from those checkpoints, they encountered a team with a broken chain on the side of a dirt trail. So Team WDQ Triple 7s jumped into action! Dana began breaking off the bad link and installed a master link that she received from the workshop. After about 30 minutes, they left the team in much better shape than they had found them.

They raced to the first transition area and the race volunteer immediately knew who they were, “Are you the team with the derailleur break?” It turns out that word had spread of their mishap and their genius fix. In fact, the race organizers put up a Facebook post about how Team We Don’t Quit (WDQ) doesn’t quit. The volunteer informed them that they would get extra time added onto their race for the time they spent helping the other team. The team continued to the paddle leg and determined that there simply was not enough time to get all the checkpoints and opted to canoe to just two checkpoints. Then they began the trekking leg. They found the first few checkpoints easily, missed a couple in the middle, and found several at the end, opting to skip the out of the way ones.

Finally, they reached the third transition area and the final leg of biking began. A race volunteer informed them that it was 2:45 p.m., and although the official race end was 3 p.m., they would be given an additional 30 minutes. The team had 45 minutes to get as many of the remaining checkpoints as they could, while making sure to reach the finish line before the cutoff so as not to lose any points. The team rode off and collected a few checkpoints. Yet after traveling several minutes out of the way to look for one, a race official told them the checkpoint was nowhere near, so the team decided to head to the finish line. They made it with a few minutes to spare and were greeted with a standing ovation from racers, volunteers, and organizers. Apparently, everyone had heard how they overcame their derailleur failure and still stopped to help another team.

After the cheers died down, the awards were given out. WDQ Triple 7s did not finish with enough checkpoints to earn a place on the podium. Next, however, the race official began to recount the team’s epic journey in the Buff Betty and concluded by presenting the team with Outstanding Sportsmanship Award and swag. So, although Team WDQ Triple 7s did not clear the course, they made a lasting impression.